Diving on the Azores-Biscay Rise

ROV Luso completed its first scientific dive of iMirabilis yesterday at the Azores-Biscay Rise. The dive objectives were to capture footage of the area and take samples at an unnamed seamount which has not been previously explored.

The ROV went in the water around 9:00 in the morning. As the start of our dive was around 2600 metres depth, it took two hours for the ROV to reach the bottom. This meant the first part of the operations involved staring at the water column as we descended, often termed a ‘blue water dive.’ For this less engaging portion of the dive we saw some jellyfish, zooplankton and gelatinous zooplankton in the water. Around 11:00 the seafloor came into view and all scientists on board focused their attention around the monitor to view the seafloor. The majority of the science team on board the Sarmiento de Gamboa watch the dive from the main laboratory. A large television screen and multiple smaller monitors are setup along one of the work benches. We all pull chairs from around the lab and find a comfortable place to sit for the duration of the dive. The two lead scientists spend most of the dive in the ROV pilot container on the rear deck. We have a walkie-talkie in the lab to contact the scientists in the ROV area to request a sample, ask to zoom-in on an organism, or to receive any general updates.

Because we were testing navigation aspects of the ROV, once we reached bottom we saw we ended up a bit further away from the seamount than we intended. This meant the first portion of the benthos section of our dive consisted of a sand-bottom environment, where we saw shrimp, pretty pink holothurians, clams, and fish. Each time an interesting geological feature or organism is seen on the monitor a member of the science team logs the entry in the Ocean Floor Observation Protocol (OFOP). As ROV trainees, Bea and I got to try our hand at data logging observations during the dive. It was tricky to keep an eye on the screen while taking notes but the other scientists would call out an organism identification if I was writing/looking away from the main monitor. I didn’t find this multitasking too difficult, as the hardest part for me was definitely species identification! This is my first cruise in the Atlantic Ocean so I am not familiar with all of the genus or sometimes even families so I relied on my colleagues for many identifications, who were happy to help share their expertise. I also really struggled with the spelling – whoever said Latin wouldn’t be useful to learn?!

As the dive continued we viewed our progress via a monitor showing our GPS location overlaid on the bathymetry we mapped last night. We watched as we inched closer and closer to the seamount. The first sign that we were getting close to our target was that we started seeing black rock fragments dispersed among the light sandy sediments. The fragments became larger and more frequent the closer we got to the seamount. Soon we started seeing larger cobbles which had some organisms on them. Both the geologists and biologists get excited when we start seeing rocks on a dive. While the geologists are excited for the obvious reason of seeing the focus of their research, the biologists also perk up as deep sea organisms are more often found on rocky substrate. Sessile benthic organisms attach themselves to the hard rocks and mobile animals also use the rocks as habitats such as a place to hide.

At first we started seeing a cobble with one or two stalked crinoids here and there. Soon after we began seeing higher densities of crinoids and some corals as well. Finally, the entire landscape changed from sandy sediment to large rock formations and boulders. Here we were treated to an exciting conglomeration of sponges and corals. It was a gorgeous view to behold and, as I was operating the OFOP when we arrived at the base of the seamount, I couldn’t type fast enough as we saw glass sponges, demosponges, stalked sponges, stalked crinoids, crinoids, bamboo corals, black corals, and gorgonians. We had been sitting on shift watching the ROV footage for nearly 9 hours aside from a short break for lunch and a few coffee runs and yet I felt disappointed when we started recovering the ROV around 18:00 as we were witnessing such an incredibly biodiverse place.

Here are some images from the ROV Luso to give you a flavour of the views we were treated to! All images © ROV Luso/EMEPC/iMirabilis2. 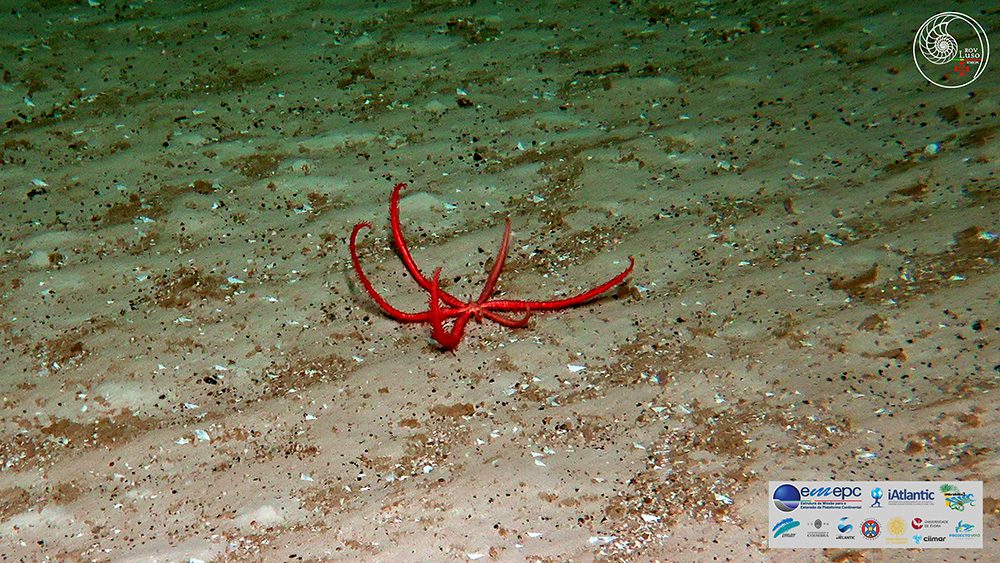 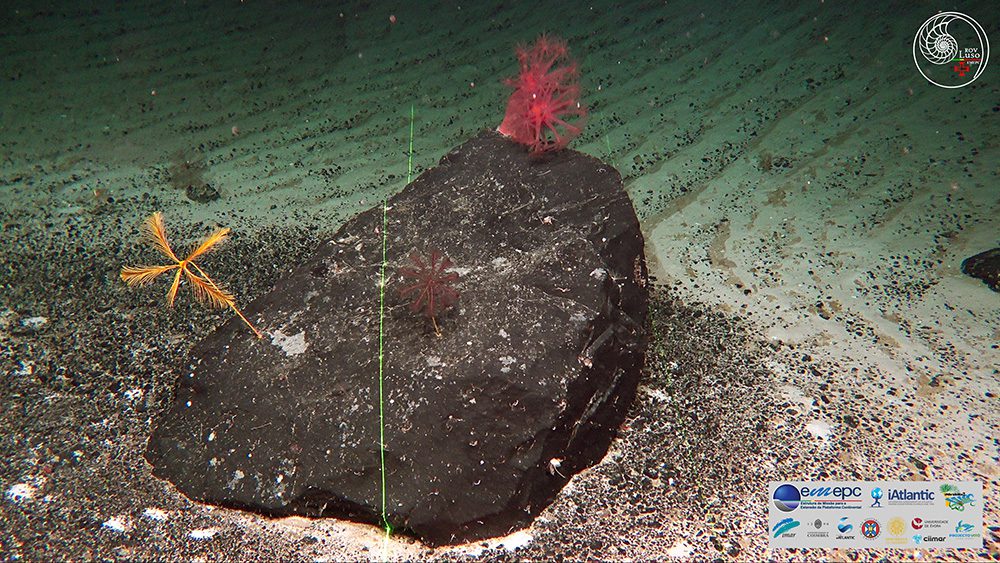 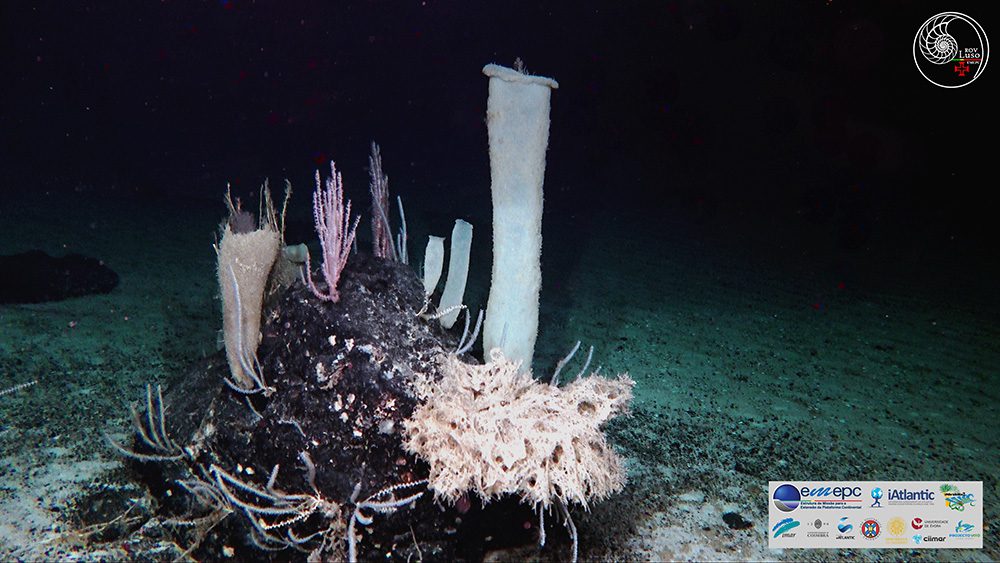 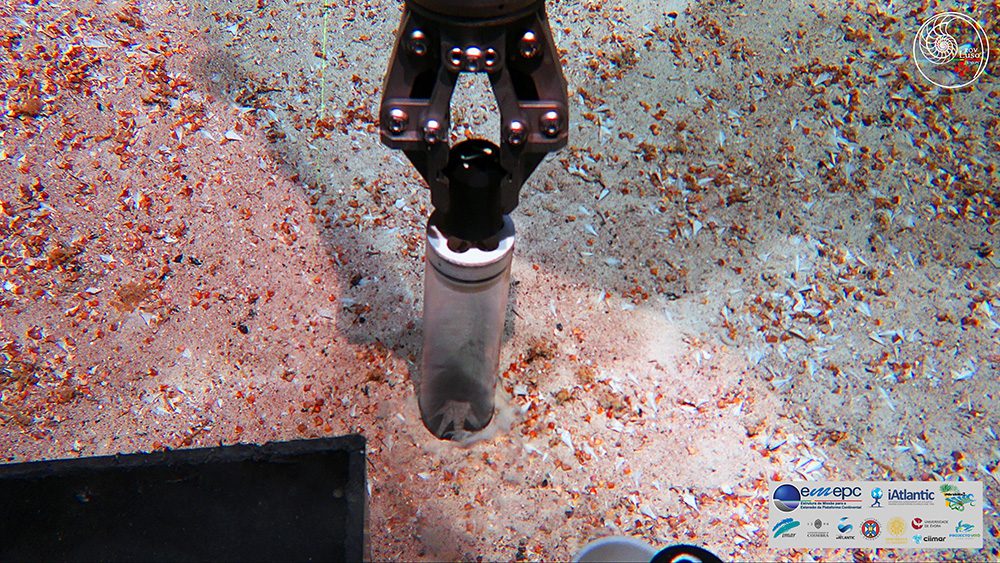 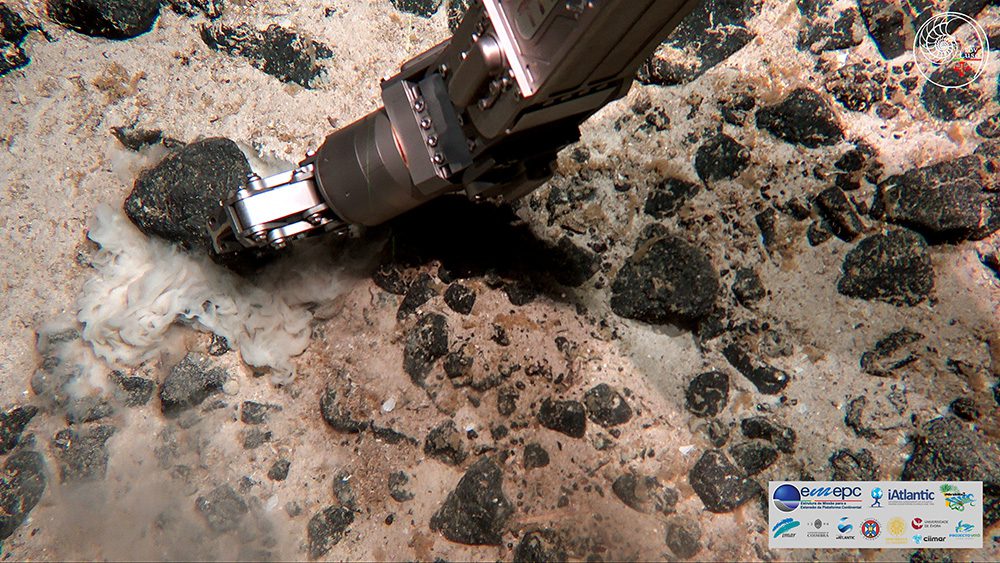 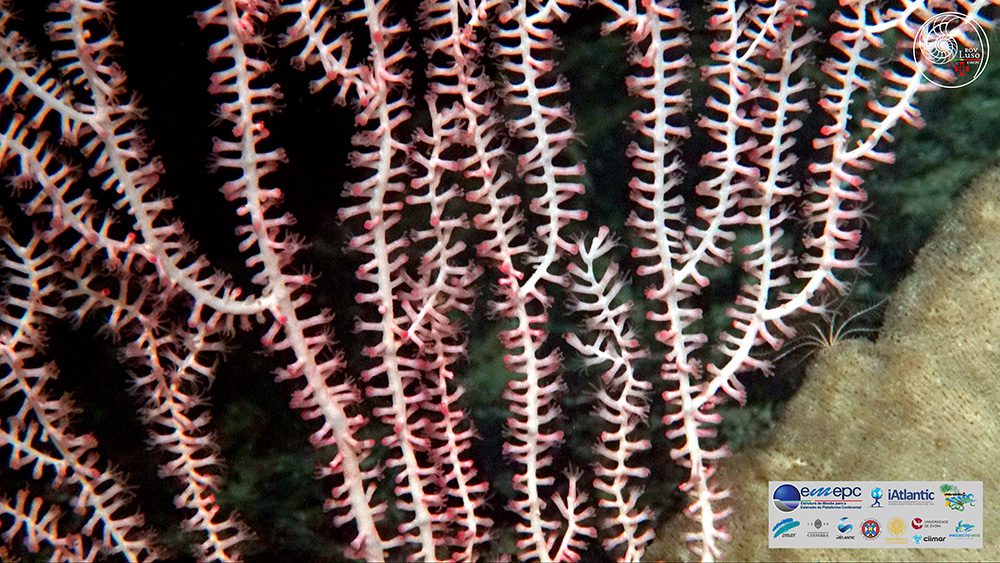 After nearly two hours of ROV recovery operations, the ROV was back on deck and the microbiology team were the first to recover their samples. They took water samples with a niskin and sediment samples with a corer during the dive. The microbiologists collected their samples with gloves on to avoid any contamination. Next up, two biology team members went to recover the samples in the ROV sample boxes. They also used gloves as the microbiology team members scraped some samples of interest off of different rocks and biological samples. Once the microbiologists were happy with their samples, the biologists removed any organisms from the rock samples and processed the biology-specific samples as well. Biological samples included crinoids, sponges, and foraminifera. The geologists were the last to access their samples, simply photographing and describing the rocks. The geology team will use the time in transit following the diving operations to saw open the rocks and fix them in resin. They are hoping for rocks which have not been altered by seawater and are thus relatively ‘fresh’ by geological definition. As the rocks collected during yesterday’s dive were all black and similar-looking, the geologists will not know if they have collected everything they hoped for until they can saw the samples to see the insides.

My main job after the dive was to sort through the still images taken by the ROV camera. From over 1000 images I selected 115 ‘best of’ images for EMEPC to use in their outputs and selected 40 to be used for outreach purposes on behalf of iAtlantic. It was quite hard to narrow down all the images to just 40 as the dive was so exciting and there were plenty of exciting moments to sort through – just a few of them are on this page for you to enjoy.

Overall, from launch to recovery it was a great dive. I really enjoyed the day, no matter how busy it was. Whenever I got a bit tired, I just thought about how incredible it was that I was getting to see places in the world that no one had likely ever seen before. This, combined with the contagious energy of excitement on board helped keep up morale into the late hours of the night. I cannot wait until the next dive of iMirabilis and hope to have more exciting news and images to share then!