!!NEW!! Join the IceDivA2 team live from RV Sonne at 17:00 CET on Thursday 18 November for our UN Ocean Decade satellite event “A floating classroom: Deep-sea science in action towards a clean ocean“

Where are we going and why?

IceDivA2 has set out to investigate the ecosystems of the deep seafloor – the abyssal plain – in the NW Atlantic Ocean. The main focus is to see how the different ecosystems and habitats found down there are connected – not just with each other, but also with the planktonic communities in the overlying seawater.

This expedition builds on the research carried out in previous missions in the North Altantic. These earlier expeditions (IceAge1, IceDIVA) carried out similar research but focused on other parts of the deep Atlantic, so IceDivA2 aims to “fill the gap” in our knowledge of deep-sea ecosystems in the north-west part of the Atlantic Basin.

This will allow us to map the biodiversity and provide an inventory of key faunal groups in the deep sea along pan-Atlantic latitudinal transects. To achieve this, we will combine the standardised sampling methods that we’ve used on previous expeditions, so that all our data can be compared. 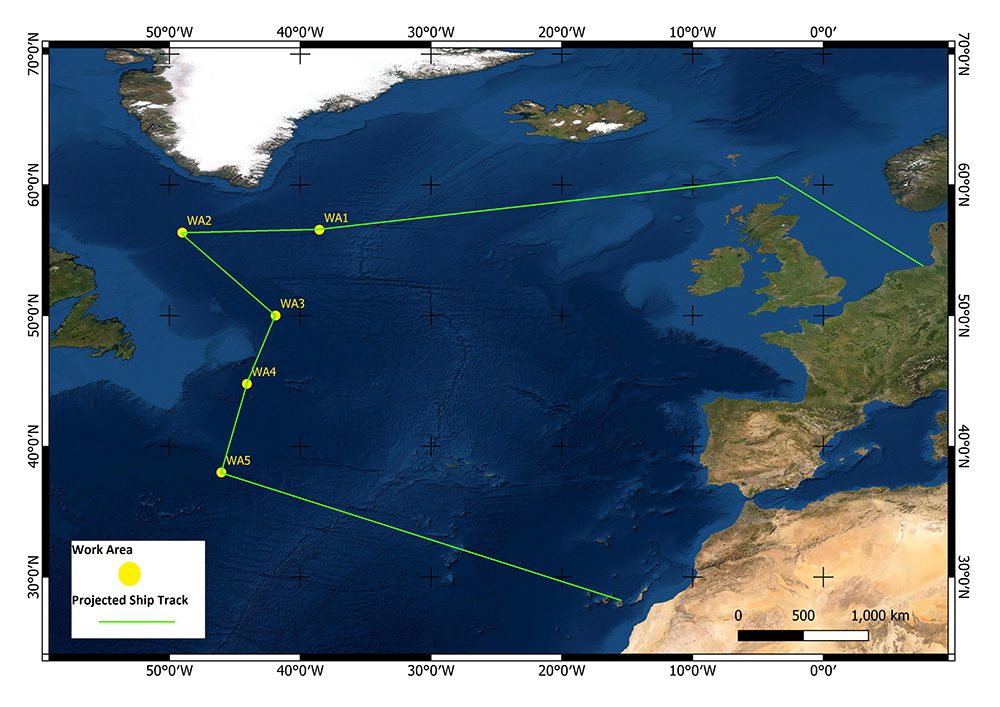 What science will we be doing?

Bathymetry: Ascertaining the topography of the seafloor – bathymetry – proved to be essential before we deployed seafloor (benthic) sampling gear during the IceDivA expedition in 2020. By being more certain about where we need to sample helps us to  limit our impacts on the sea-floor. The IceDivA2 sampling stations have been carefully placed so that we focus on areas of the seafloor that haven’t been mapped yet, so that we don’t duplicate previous work. This also includes the transits to and between the stations, when we will also survey previously unmapped seafloor.

Meiobenthos (small invertebrates living in or one the seafloor): New samples of these small creatures that live on and in the seafloor sediment will add to the archive of samples from previous missions to the Atlantic, and help answer some major research questions: what is the role of oceanic islands and seamounts for the evolution and dispersal of meiofauna? How do submarine topographic features such as the Mid Atlantic Ridge affect dispersal of larvae and populations in the deep sea? And does the vast size of the abyssal plains affect the long-distance dispersal of shallow-water meiofaunal species? As well as answering some of these questions, these new samples  will help build a picture of the general pattern and extent of genetic connectivity of populations across the whole Atlantic Ocean.

Macrobenthos (creatures living in or on the seafloor, up to about 2mm in size): We will use the same set of equipment to follow the standardised approach successfully proven during the previous IceAGE and IceDivA expeditions. We will use an epibenthic sledge (EBS) to collect specimens for population genetics studies, while box corer deployments will help us look at what lives deeper in the sediment.

Megabenthos (larger creatures living on or at the seafloor): This part of our work will be conducted primarily through video and image analysis taken via the Ocean Floor Observation System (OFOS).

Zooplankton: The fast and reliable assessment of species diversity is a crucial key to set baselines in biodiversity, understand the relationship of species to the surrounding environment, detect the influence of anthropogenic disturbances on species compositions and protect the deep-sea fauna from such disturbances. By taking samples at different water depths, we can assess the influence of environmental parameters on the abundance, biomass, and vertical distribution of zooplankton, covering the whole water column along a latitudinal gradient. Molecular genetic approaches will allow us to identify species that are hard to identify through standard methods.

Metabarcoding and eDNA:  The usual microscope-based identification of zooplankton and meiofauna is time-consuming, demands comprehensive taxonomic knowledge, and has been shown to often underestimate true diversity due to occurrence of many cryptic species. Also, for large regions of the world, such as the deep sea, many species are not described yet. We will take samples for novel molecular and genetic approaches to species identification, so that we can compare the efficiency of these new approaches – like eDNA biodiversity assessment and metabarcoding – to see how they compare to more standard techniques of identifying species.

Marine Plastic Pollution: The North Atlantic is estimated to contain approximately 20% of the global amount of floating plastic debris. Samples of plastic will be collected and analysed for their chemical composition and origin, and the diversity and functions of any microbial communities colonising them will be examined. Sediment cores and selected fauna will be preserved for later analysis of their microplastic content, including for plastic indigestion by marine fauna.