Movement of oceanic water masses is driven by two mechanisms: faster wind-driven circulation that affects surface waters, and slower deep-water circulation driven by differences in water density (temperature and salinity). In the Atlantic, strong overturning circulation is driven by warm surface water in equatorial regions being drawn towards the poles where it cools and becomes more saline, sinks and then returns towards the equator thus creating a large-scale conveyor belt of ocean water. This is known as the Atlantic Meridional Overturning Circulation (AMOC). Whilst deep-water ocean circulation does vary on an annual or decadal timescale, it is relatively stable and predictable over long time periods. However, the consequences of climate change, such as the warming of surface waters and melting of glaciers, could significantly disrupt this mechanism and have significant consequences for marine ecosystems and the services they provide to the planet and humankind. 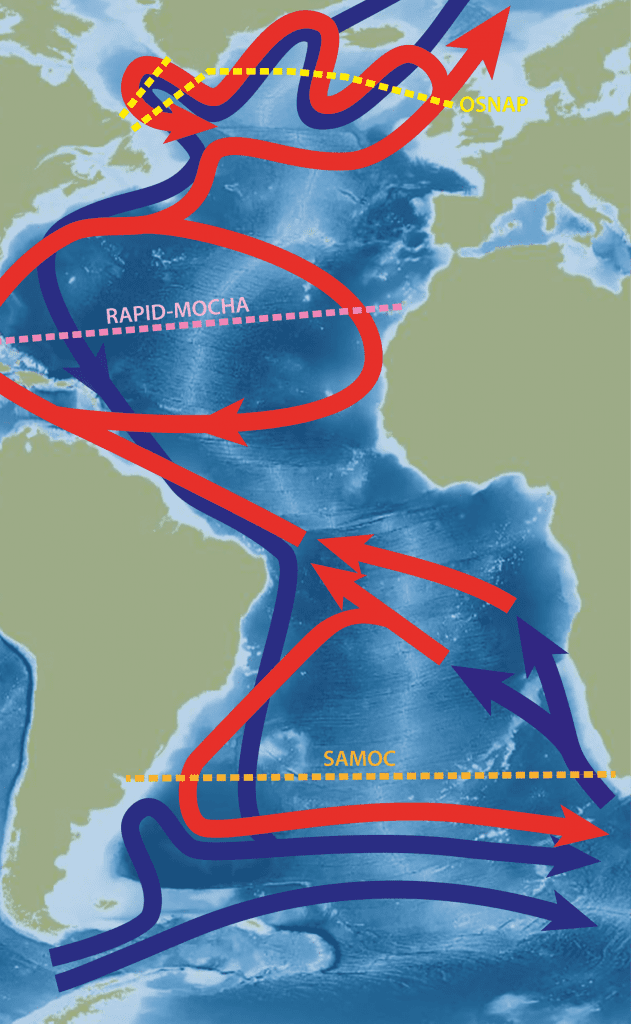 Scientific understanding of ocean circulation is achieved by direct measurements of seawater using in situ moorings, satellite observations from space, and the use of computer models to predict how circulation might change over time in response to changing conditions, such as global temperatures. Ocean models are built using real measurements, but allow us to look both backward and forward in time in order to understand what drives changes in ocean circulation patterns, and what the environmental and ecological consequences of those changes might be.

Recent scientific research shows that the AMOC is becoming weaker, and is currently at its weakest state for 1600 years. By the next century, climate change impacts on the AMOC will have affected much of the deep and open-ocean Atlantic, altering not only patterns of water temperature and salinity, but also the carbonate chemistry and the distribution of oxygen – which could radically impact marine ecosystems from the bottom of the food chain to the top ocean predators.

To better understand and manage these consequences, iAtlantic will improve our capability in measuring the AMOC by enhancing the arrays of instruments that currently monitor ocean circulation at the northern and southern boundaries of the Atlantic (see map above). The array of sensors in the North Atlantic (known as the RAPID-MOCHA array) captures a full suite of ecosystem-relevant physical and biogeochemical measurements, but the SAMOC array in the South Atlantic and the OSNAP array in the far northern Atlantic currently have more limited capability. iAtlantic will install oxygen sensors on the SAMOC array and extend its western reach to include the Brazil Current. Oxygen sensors will also be added to the OSNAP moorings, allowing scientists to get a more comprehensive picture of the fluxes of carbon, nutrients and oxygen in the northernmost reaches of the AMOC.

iAtlantic will use two high-resolution ocean models (called INALT and VIKING) to look back in time at Atlantic ocean circulation patterns over the past 60 years. These patterns can then be compared with the present-day observations delivered by the mooring arrays in the north and south Atlantic. Forecasts of how Atlantic circulation is likely to change over the next 50 years will be generated by coupling the models to realistic global warming scenarios. Results will provide information on the frequency, duration, magnitude and rates of change in Atlantic circulation, as well as helping to predict extreme events such as marine heat waves. Knowing the nature of future circulation changes and where in the ocean these changes will be most pronounced will enable us to assess the consequences for Atlantic ecosystems.

The information from the ocean models will also provide essential information to advance our understanding of how marine ecosystems are connected. Lagrangian (particle tracking) modelling techniques will be used to determine how drifting organisms (e.g. pelagic larvae, juveniles, marine snow) are dispersed in the Atlantic, and therefore clarify the role that ocean circulation plays in keeping ecosystems connected through the movement of genetic material and food.