Canyon sediments (and why you should care about them)

Greetings to all our blog readers! We are writing to you from a deceptively calm-looking North East Atlantic. We’ve been very lucky with a few days of great weather and have been hard at work trying to utilise these days (and nights!) as best we can.

While things on the surface may appear calm, down below it has been quite the opposite with the ROV battling against strong currents and internal tides in the canyon. As the ROV pilots are plunging through the darkness, I’ve taken some time to sit down with Esther Sumner, our on-board sedimentologist, to learn a bit more about the importance of understanding the dynamics of deep sea sediments.

It’s only relatively recently that scientists have come to discover that the Whittard Canyon is not as inactive as once thought. Submarine canyons so far offshore are generally assumed to be fairly quiet, but this is not the case here. There are avalanches, with similar dynamics to those on snowy mountains, that carry vast amounts of sediment from shallower areas, through the canyon, and into the deep sea. Unpacking aspects of sediment avalanches (turbidity currents in scientific terms), such as how often they happen, how big they are and how far they go, are all factors that play an important role not only for the animals of the deep but also, in fact, for humans.

On the biological front, the movement of sediments also mean the movement of the things they carry. This can include things like valuable nutrients, but also unfortunately things like microplastics and pollutants that have gathered in and on sediments over time. To investigate how nutrients and pollutants are being spread through the Whittard Canyon by these avalanches, we are collecting core samples in different areas where we expect sediment to travel through.

Large avalanches can also be quite destructive to infrastructure installed on the seabed, such as fibre-optic cables and scientific moorings. The majority of global data transfer happens through fibre-optic cables on the seafloor. In 2020, a massive sediment avalanche in the Congo Canyon resulted in substantial damage to seafloor cables that severely affected internet speeds across large parts of central, south and west Africa. It also broke scientific sensor moorings that were collecting valuable data on submarine canyon processes (see here for more). It has since been revealed that changes in weather patterns owing to climate change can be a substantial contributing factor of events like these. As the majority of global data transfer takes place through seafloor cables, such events can have major economic impacts.

In addition to avalanches, we are also zooming in on canyon sediments to examine the impacts of heavy fishing pressure, but more on this later…

On a closing note: our ship pigeon has since received the not-so-exciting name of Michael. He’s currently living his best life on the ship and has claimed an official spot on the aft deck. 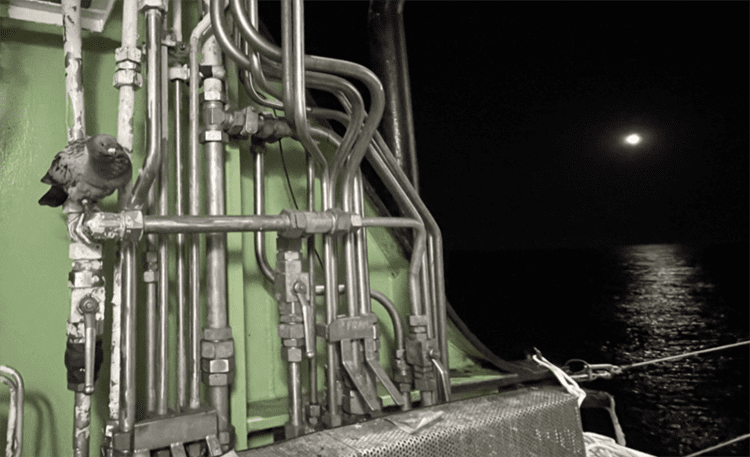