A lander is a metal frame, equipped with various instruments to measure biological, physical or chemical properties at or near the seafloor. They are lowered into position on the seafloor and are usually deployed for a specified amounts of time. Here is a quick overview of the different types of lander being used during iMirabilis2…

The benthic respirometer lander is a device capable of conducting experiments at the seafloor on its own. We call these experiments ‘autonomous in situ incubations’.

Heavy weights are attached to the legs of the lander, making it sink when put overboard. Once landed on the seafloor, a computer is programmed to start the experiments at a certain time. Benthic chambers (basically upside-down fancy plastic buckets) are pushed into the sediment by the computer and drive motors, sealing off a bit of the seafloor environment from the rest of the ocean. The computer then injects a little bit of food into the chamber, which is consumed by the organisms in the sediment, thereby using up oxygen, producing carbon dioxide, and regenerating nutrients.

After about 48 hours the computer closes the chamber doors (similar to those flexible garage doors) so that the sediment is now fully surrounded by the chamber. We then send a sound signal from the ship, which activates the releases. The releases open up upon hearing the sound signal, detaching the weight from the lander frame. Without the heavy weights the floats now provide positive buoyancy to bring the lander back to the surface.

At the surface we recover the lander back to the ship, and we process the water samples and sediment samples in the lab. The data we obtain can tell us which organisms were involved most in eating the food, how much they have eaten, and how their activity changed the chemical composition of the seawater (oxygen, carbon dioxide, nutrients). This provides insight not only in which organisms were there, but also into what they were doing and how much of it they were doing, which we call ‘ecosystem functioning’. 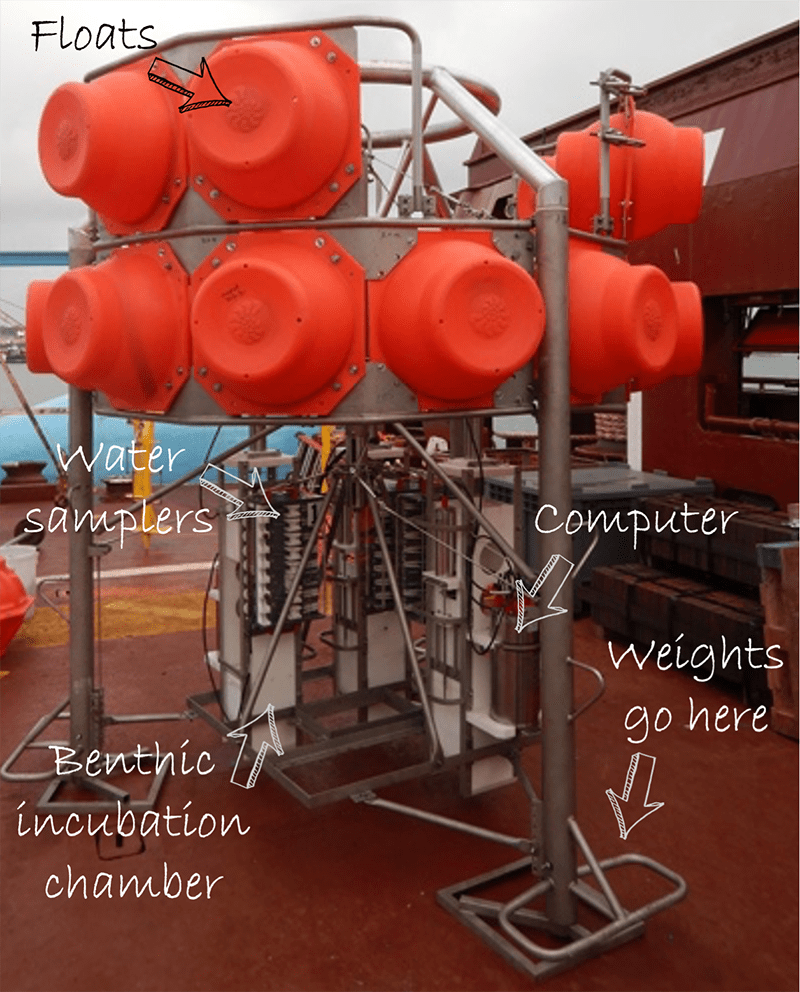 The baited camera lander is a device that attracts scavengers with lovely smelly bait, and then takes pictures of the bait being devoured. 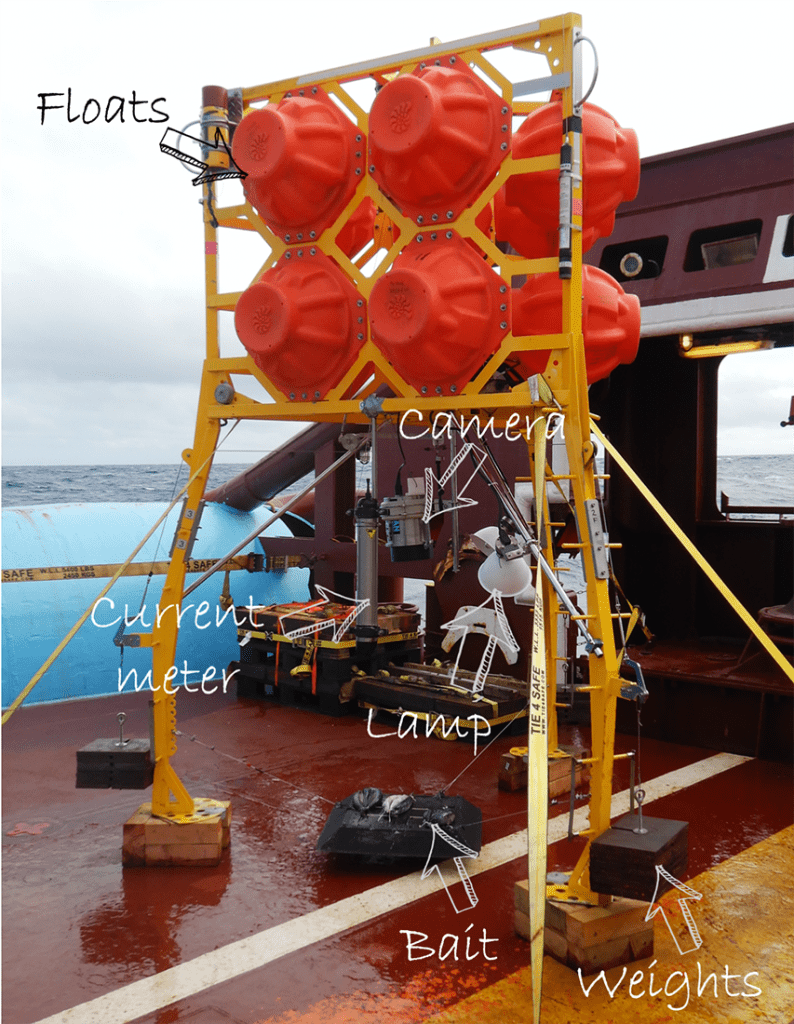 A plate with a known weight of bait, like fish or squid, hangs at the bottom of the lander, with a camera supported by flashing lights pointing straight at it. Heavy weights on the camera legs make the lander sink to the ocean floor. Scavengers in the deep sea are then attracted to the smell of the bait, as food in the deep sea is scarce (they are hungry!). The camera takes pictures at regular time intervals, documenting all the different fish, shrimp, and occasional other visitors like sea stars, that come and eat the bait.

Additionally, we have a current meter mounted on the side of the lander. This sensor records the direction and speed of the water passing by the lander over the time of the experiment.

After about 24 hours we send a sound signal to the ship, activating the releases. The releases open up upon hearing the sound signal, detaching the weight from the lander frame. Without the heavy weights the floats now provide positive buoyancy to bring the lander back to the surface. At the surface we recover the lander back to the ship, where we weigh the remaining bits of bait, download the camera images, and download the current meter data. We then annotate the images, meaning we write down when organisms first arrive at the scene and what their names are.

After a certain amount of time we send a sound signal to the releases on the baited trap. The sound signal makes the releases switch open, thereby releasing the weights. The floats on the mooring line then provide the positive buoyancy to bring the lander back up to the surface.

At the surface we put all organisms on ice, and we process them. Captured organisms provide references for the organisms we see on camera from the baited camera lander. Additionally, we can sample their tissues to learn a lot about their ecology. We can for example take tissue sample for stable isotope analysis, which informs us on the position of scavengers in the food web. 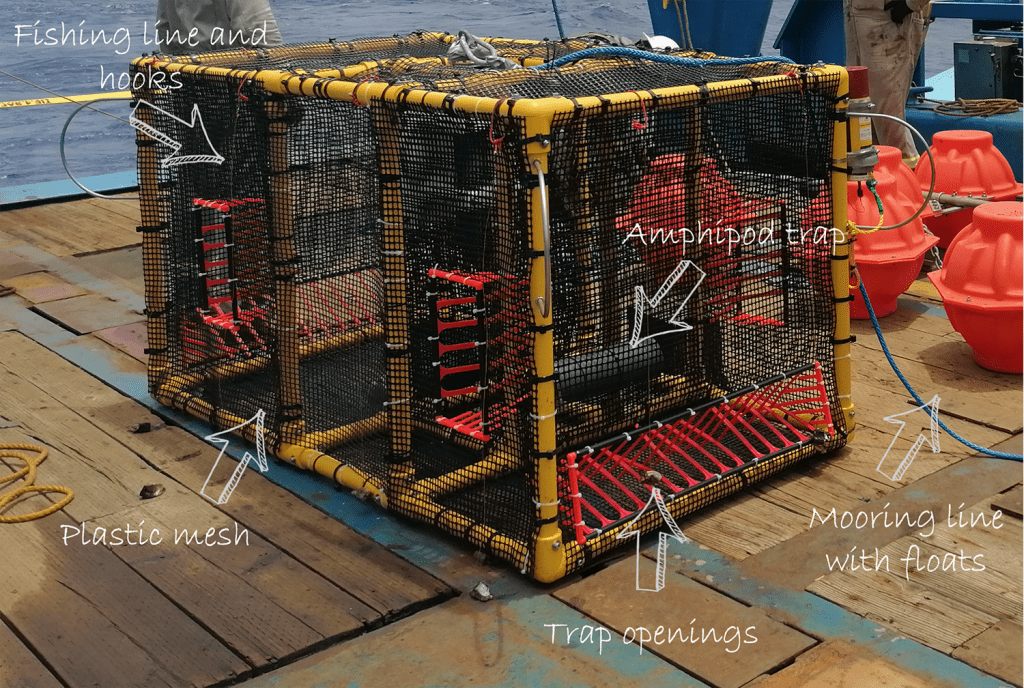