A new paper, published this week (19 Jan 2023) in the journal Communications Earth & Environment, outlines how international scientific partnership, collaboration, pooled resources and shared ambition can deliver the information to better manage and protect ecosystems in the deep and open ocean.

Ocean ecosystems are at the forefront of the global climate and biodiversity crises. They are experiencing rapid environmental change, and over the next century are likely to reach tipping points – the point at which change is irreversible – in ecosystem function, significantly impacting the services they provide to humankind. However, research efforts to better understand and assess ocean ecosystem status, resilience and vulnerability lacks a unified approach.

Led by University of Edinburgh’s Prof. Murray Roberts, this new paper presents a ‘blueprint’ designed around sharing research expertise and working across government, industry and academia to create the best multi-disciplinary marine science relevant to resource managers around the world.

Prof. Roberts explains “After absorbing over 90% of global warming and 25% of our CO2 emissions, the ocean is taking an unprecedented climate hit and changing faster than ever before. Most of our ocean is over 4 km deep, far from shore and hard to study. Our blueprint shows how we can work across nations to share ships, expertise, equipment and finance to study how deep and open ocean ecosystems are changing. We must share scientific understanding across nations and put people at the heart of everything we do to create long-term plans for sustainable management and eventual restoration of the deep sea.”

The blueprint describes six priorities including integrating basin-scale observation, modelling and genetic approaches to understand Atlantic oceanography and ecosystem connectivity; improving ecosystem mapping; identifying potential tipping points in deep and open ocean ecosystems; understanding compound impacts of multiple stressors including warming, acidification and deoxygenation; enhancing spatial and temporal management and protection. The authors argue that these goals are best achieved through partnership with policymakers and community stakeholders, and promoting research groups from the global South through investment and engagement.

Prof. Roberts says “Given the high costs of such research – around €800k to €1.7M per expedition and €30-40M for a basin-scale programme – international cooperation and funding is integral to supporting science-led policies to conserve ocean ecosystems that transcend jurisdictional borders”.

Current scientific efforts to understand how marine ecosystems respond and cope with the combined pressures from climate change and human activities are rarely transdisciplinary, and are hampered by the persistent strong imbalances in capacity, funding and opportunity between the global North and South. This has serious implications for effective ocean governance, particularly as climate-ocean interactions and ecosystem status should be assessed the same way across and between ocean basins. The scientific community’s ability to formulate knowledge-based measures to address the climate and biodiversity crises largely rests on finding ways to tackle geographic disparities in availability and access to scientific infrastructure, data, and services and on our ability to build robust human networks to bridge the geographical divide.

This approach is being tested for the first time via the ‘iAtlantic’ project by bringing scientists and policy specialists together from Europe, Argentina, Brazil, South Africa, Canada and the USA. Angel Perez, Professor at University of Vale do Itajaí in Brazil says “Through iAtlantic we’ve discovered how the fish populations off Brazil are changing. As the oceans warm, we’re seeing rapid ‘tropicalization’ with fish adapted to warmer waters spreading fast into waters off southern Brazil while the numbers of species used to colder waters are declining. Now we have a good foundation to start work to influence new fisheries management plans.”

The paper’s authors believe the ‘Atlantic Science Blueprint’ shows how we can bridge the divides and share expertise. The approach emphasises the importance of developing innovative technologies, sharing human and technical capacities (including access to offshore vessels and equipment) and incorporating marine environmental and human activities data generated from diverse sources, including industry and local ecological knowledge. Above all, research programmes must be co-designed between North and South, and must include effective capacity building and wider engagement. This is vital if we are to work effectively between nations to translate knowledge into ‘actionable science’ and an understanding relevant to shaping ocean policy and governance regimes at ocean basin scale. 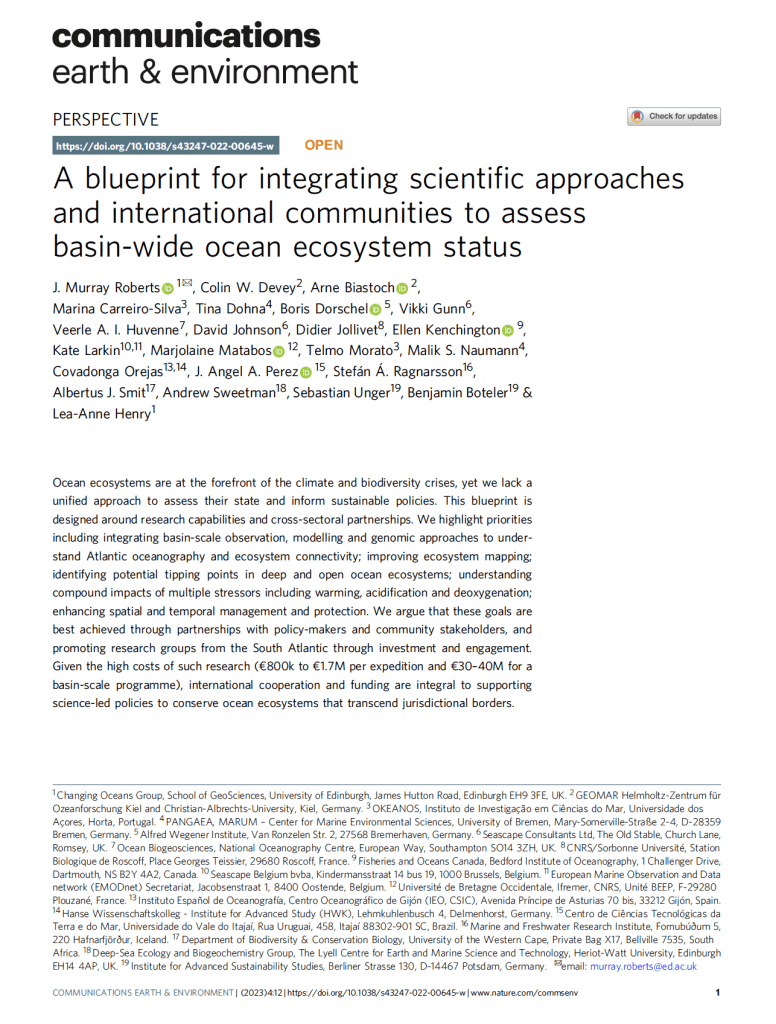