Today is the 26 August, and in less than one hour the iMirabilis2 adventure will finish and we will start sailing home.

Over these three and half intense working weeks we have been conducting a full research programme off Cabo Verde. Our adventure has led us to the seamount of Cadamosto (exploring areas from 2500 to 1700 m depth) – one of our main research areas – to the abyssal plains off Cabo Verde (exploring areas around 4000 m depth). Wind and sea conditions around the exposed location of Cadamosto on some of our working days led us to look for more sheltered areas to include in our research programme: the steep slopes of the islands of Fogo and Brava.

The discoveries of Cadamosto were fabulous. The volcanic nature of the seamount presented in front of our eyes had dramatic seascapes with black volcanic rocks and lava flows, colonised by different benthic communities occurring on different sides of the seamount. The seamount displayed colourful gorgonian gardens, sponge fields, and stony coral-dominated areas, among others. Analysis of the underwater video material in the coming months will reveal the bathymetric distribution of the species and communities as well as the spatial distribution patterns. The slopes of Fogo and Brava showed a different composition of benthic megafauna, and the comparative study of the seamount and the slope of the two islands will contribute to our better understanding of the seamount fauna and the differences and similarities to the fauna of the nearby island slopes. Besides the surveys conducted with the ROV Luso, the water column characterisation of the study area via CTD-Rosette will be the basis for the development of an oceanographic model that will help to better understand the occurrence and distribution of the different communities in Cadamosto and the slopes of the islands.

Besides the discoveries of Cadamosto and the island’s slopes, the abyssal plains off Cabo Verde have been successfully explored through the repeated deployment of the respirometer, baited camera (with fish or squid) and trap landers. The preliminary visualisation of the photographic material of the baited camera revealed differences in the food preferences of the deep-sea fish inhabiting the area: significantly higher rates of scavenging on the squid compared to the mackerel suggests that deep-sea scavengers could also be affected by climate change and overfishing. Also, the experiments conducted on board with sediment cores collected at the beginning of the expedition revealed differences in the functionality of deep-sea soft bottom ecosystems of Cabo Verde under different climate change scenarios.

The AUV Autosub6000, which we planned to use to conduct high resolution bathymetry, photographic missions and eDNA sampling with RoCSI, unfortunately experienced a series of technical issues that impeded the successful accomplishment of the research program planned for this piece of deep-sea infrastructure. However, an important result of the two missions with the Autosub6000 was the acquisition of samples by the eDNA sampler RoCSI, which was one of the aims of this expedition. In addition to the work done with the landers and Autosub, CTD-Rosette casts have provided information on the oceanography of the abyssal plains, as well as water samples for eDNA analyses and information on the food quality of the suspended particles in the water column.

The paleoceanographic study of the area will be accomplished thanks to the sampling of multicores in the abyssal plains off Cabo Verde, as well as of three multicore samples at different depths on Cadamosto seamount. Part of the material of the multicorer, as well as of the push cores collected with Luso, will be also used to perform analyses on the quality of the sediment as a potential food source for the benthic community.

Last but not least, during the expedition we were able to perform several multibeam surveys, which allowed us to map the seafloor around Brava and the southern part of Fogo.

The fabulous teamwork performed by crew, technical teams, and scientists, was exceptionally good and enjoyable, and played a fundamental role in the success of the scientific sampling and coping with the technical challenges we experienced. The human component of every cruise is important, but in iMirabilis2 was especially remarkable.

Now sailing home, everyone on board has a good feeling of a job well done, but also the sadness of leaving the fantastic waters off Cabo Verde and our home and family during the past month: the vessel Sarmiento de Gamboa and her crew.

Greetings from the Atlantic Ocean!

Want to know more about the iMirabilis2 expedition? Visit the expedition website and blog. 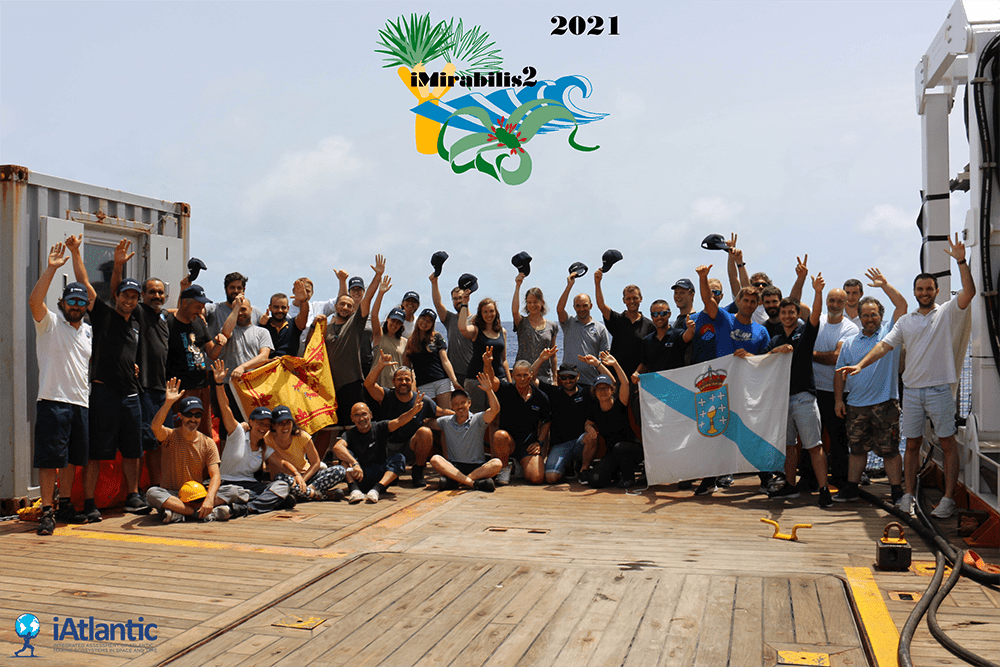